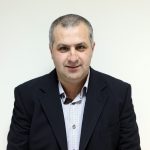 Dr. Zafer Tayseer Mohammad holds a BA in English Language and Literature from An-Najah National University in Nablus, West Bank (1996), a Master’s degree in International Peace Studies from the University of Notre Dame, South Bend, Indiana (2004), and a Master’s degree in Biblical studies from the Catholic Theological Union in Chicago (2006). He was awarded a doctoral scholarship from the Swiss government (2012) and successfully defended his doctoral dissertation: “the dismal depictions of Jerusalem and her transformation in the book of Isaiah” (December 2016), written at the University of Zurich under the academic supervision of Prof. Konrad Schmid. His dissertation’s fundamental purpose was to explore Jerusalem’s centrality and significance in the book of Isaiah with particular emphasis on its transformation from the ruination and demise of former times to its deliverance and restoration.

His academic endeavors are guided by a vision that education is a vital instrument in fostering peaceful coexistence, in building mutual respect, and in promoting understanding between Jews and Muslims. As a pioneer in the academic context of the West Bank, Zafer believes that Palestinian Muslim students and scholars need to know more about Jewish and Christian scriptures to better understand the rich heritage they have in common with them.

To that end, he primarily focuses on two interrelated goals. The first includes enhancing the West Bank academic curricula by including two elective courses; namely, “Introduction to the Old Testament” and “Introduction to Biblical Theology,” in some academic departments to further the establishment of Bible studies in the departments of history and faculties of Islamic theology. The second Goal is the creation of a cadre of Palestinian scholars who are trained in Biblical studies. He also has plans for undertaking a future research project titled “Introducing Bible Studies as an Academic Discipline in the Islamic Academic Settings of the Middle East” and, hopefully, founding an Arabic publication that will be a groundbreaking resource in the area.

As a post-doctoral fellow within the Biblia Arabica project, Dr. Zafer concentrates on examining and analyzing the references to Jerusalem in the Arabic versions of the book of Isaiah, especially the Jewish translations. It would be exegetically beneficial to illustrate how Isaiah’s references to Jerusalem have been expressed in Arabic, the sacred language of Islam, in order to elucidate Jerusalem’s theological significance in non-biblical language and even in the sacred language of the Qur’an. Dr. Zafer’s research primarily focuses on the Genizah collections, Karaite translations, and the Tafisr of Saadiah Gaon. He will also study the Christian translations, the West and East Syriac and the Coptic translations, while comparing those to other ancient versions such as the Targums, Vulgate, and Septuagint.

In dealing with the Jewish translations of and commentaries on the book of Isaiah (especially the ones by Saadia Gaon and the Karaite translations), he is interested in understanding and analyzing the theological and political perspectives of Jewish communities on Jerusalem; the dwelling city of Yahweh on earth, which was under a non-Jewish rule when these translations were produced. As for the academic outcome of his fellowship, Dr. Zafer intends to publish two papers: the first deals with the Jewish translations of the references to Jerusalem in the book of Isaiah and the other focuses on the Christian translations.