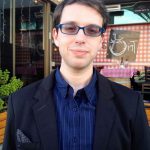 Sivan Nir is a PhD student of the Bible program in the Department of Biblical Studies at Tel-Aviv University. He started working on his PhD dissertation last October (2013). Its title is, “The development of the literary character from late Midrash literature to medieval exegesis, as exemplified in the characters of Balaam, David, Jeremiah Ruth and Esther”. This dissertation expands upon the methods of his earlier MA thesis, “The Character of Ruth in Medieval Jewish Exegesis”.

Nir’s scholarly pursuits include: Medieval hermeneutics, possible connections between Jewish Arabic Medieval Exegetes and their European counterparts, the Influence of later midrashic Collections upon Medieval Jewish commentaries, and also the Minor Prophets in all aspects of modern research.

Nir’s contribution to the DIP project focuses mainly on translating exegetical texts relating to his dissertation from manuscript form, mostly of the important Karaite exegete Yefet Ben Eli. Currently, Nir is assisting Prof. Meira Polliack and Prof. Eliezer Schlossberg with preparations for their future edition of Yefet ben-Eli’s commentary on Zephaniah. Nir created this website with the assistance of Prof. Athalya Brenner. He updates and maintains the site on a regular basis.
Articles

Selected publications relevant to the project
— with Meira Polliack: “Many Beautiful Meanings can be Drawn from such a Comparison”: On the Medieval Interaction View of Biblical Metaphor in Exegesis and Poetry in Medieval Karaite and Rabbanite Texts, Karaite Texts and Studies Volume 9. ed. J. Yeshaya and E. Hollender. (Leiden: E. J. Brill, 2016,forthcoming), pp. 51-100.