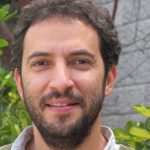 Dr. Roy Vilozny holds a BA in Arabic Language and Literature and Islamic and Middle Eastern Studies from the Hebrew University of Jerusalem (2000). His Master’s thesis, which describes the way early Imamate sources depict the life cycle of the Shi’ite believer — from his inception and until the end of time — was written under the supervision of prof. Etan Kohlberg of the Hebrew University (2004). In his doctoral dissertation (2012), supervised by prof. Meir M. Bar-Asher of the Department of Arabic Language and Literature at the Hebrew University, Vilozny delineates some fundamental theological principles and religious concepts of the Imamate Shi’a in its formative period (the 9th-10th centuries CE).

As a fellow at the DIP Biblia Arabica project, Vilozny examines the way early Isma’ili authors approached the Bible. His main focus is on the their unique interpretation of biblical prophetic stories and their significant role in shaping the Isma’ili cyclical history of the world and of humankind.

— A 10th Century Isma’ili Guide to the Secrets of the Prophets (in preparation).

— ‘Some Antecedent Biblical Occultations according to the Shiite ghayba Genre’ (in preparation).