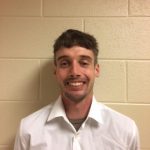 Dr. Martin is a specialist in the history of medieval Iberia’s Arabic-speaking Christians, a group many scholars now call Mozarabs. His essay, “A Mozarab Translator at Work,” will appear in the forthcoming volume Senses of Scripture, Treasures of Tradition. Since completing his dissertation, he has begun revising the work into a monograph, under the working title “The Mozarabs’ Bibles”. His project offers a thorough look at the Mozarabic translators who rendered the Psalms from Latin into Arabic, as well as the Mozarabic scribes/annotators who wrote hundreds of Arabic notes in Latin biblical manuscripts. Broadly speaking, he demonstrates that the Mozarabs employed Qurʿānic phrasing in their Arabic translations, but also that they drew upon Latin culture to a greater degree than many scholars have realized. Furthermore, rather than trying to determine whether the Mozarabs were Muslims who converted to Christianity or Christians who became Arab, as some scholars have attempted, Dr. Martin argues that the Mozarabic translators and annotators whom he studies get as close to the literal meaning of Mozarab—one who acts like an Arab—as we are going to get. He has won grants and fellowships from The Medieval Academy of America, The Warburg Institute at the University of London, and the University of Tennessee Humanities Center, among others.

Dr. Martin has also begun thinking about a second project. While he plans to continue interpreting the Mozarabs’ manuscripts, such as an eleventh-century canon law manuscript in Arabic, he also wants to learn and write about the Arabic-speaking Christian communities of North Africa. He is grateful to contribute his scholarship to the Biblia Arabica project, from which he has learned much about the medieval Mediterranean world.