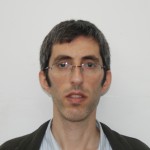 Dr. Doron Ya’acov graduated with a BA in the Bible and Hebrew Language from Herzog Teachers’ College (2001). He received an MA in Hebrew Language from the Hebrew University of Jerusalem (2005). The title of his Master’s Thesis is “Plural Suffixes in Mishnaic Hebrew as Seen in the Kaufmann Manuscript”. He wrote his dissertation, “The Hebrew Language of the Jews of Southern Yemen (the Sharʻab and ʻAdan [Aden] Communities): Phonetics and Morphology of the Noun in the Mishnah”, at the Hebrew University of Jerusalem, under the guidance of Prof. Moshe Bar-Asher, and it was completed this past year.

Currently, he works in the academic secretariat of the Academy of the Hebrew Language and teaches in the Department of Hebrew language at Herzog College. He is interested, and engaged in, the study of the Hebrew language in all its periods, particularly Mishnaic Hebrew. He also studies the Arabic of the South-Yemenite Jews, on which he is currently editing a dictionary.

In the DIP project, Ya’acov intends to work on a traditional Yemenite Jewish reading of Rav Sa’adia Gaon’s translation of the Bible, including analysis of thetext’s grammar and special phenomena relating to the Yemenite oral tradition of Judeo-Arabic.

— The Tifsīr – Rav Saadia Gaon’s Translation of the Bible according to The Yemenite Jewish Oral Tradition: Critical Edition with an Introduction, (forthcoming).

— ‘The Yemenite Jewish Reading Tradition of Rav Saadia Gaon’s Translation of the Bible – Phonology, Morphology and other Characteristics’, forthcoming.