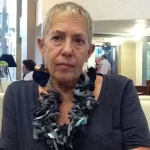 Within the Biblia Arabica Project she will work on two research issues: 1. The links between the biblical stories about Abraham, Sarah and Hagar as they developed in their Jewish and Islamic afterlives through contacts and mutual dependencies, mainly as correlated to questions of territory; and 2. The development of the Islamic concepts on prophecy and list of prophets, from the biblical notions through the Qur’an and onwards, as reflected in literature of the first millennium CE. An additional task will be to support and enhance the visibility of the Project and its aims with international scholarly organizations, such as the SBL.